It would be difficult to identify a report that has been as influential in guiding 21st century dental practice as the Gies report published in 1926.1 While his conclusions are well known, what was always of interest to me was what he was thinking and who was he consulting with as he prepared his report. Recently, I uncovered a correspondence between Gies and Dr. Simon Flexner, Director of the Rockefeller University in New York. A comparison of this correspondence with the contents of his final report suggested to me that Dr. Flexner’s response altered his thinking and could have changed the direction of his report and his vision for the future of the dental profession.

Figure 1A shows a letter dated September 11, 1924, from Gies to Dr. Simon Flexner, 2 years before the publication of his report on dental education. It is typed on Carnegie Foundation stationary indicating he was working with Carnegie funding. There are three paragraphs. In the first sentence of the first paragraph, Gies asks Dr. Flexner to consider establishing a department for dental research at the Rockefeller Institute. As justification for his request, he writes of the “healthy dissatisfaction among the dentists with the outcome of political efforts in research” by the National Dental Association, (forerunner of the American Dental Association). Clearly, some faction of the dental community was dissatisfied with the NDA’s research agenda and had asked for Gies to seek another venue for dental research. Gies was offering Dr. Flexner funds to set up a dental research program. Significantly Gies was not thinking of the dental schools as the site for dental research. 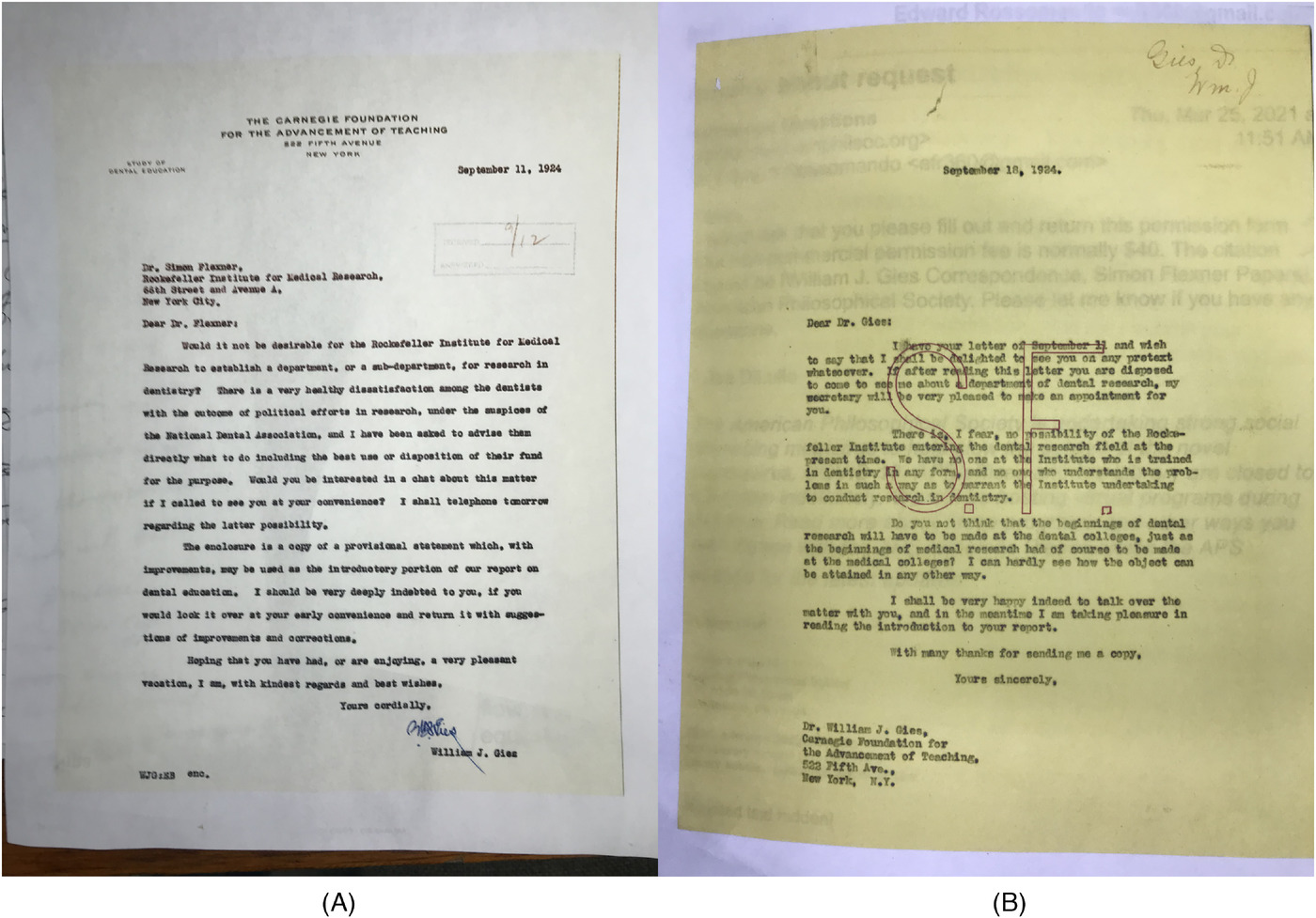 (A) Letter from William Gies to Simon Flexner. (B) Letter from Simon Flexner to William Gies
While we can only guess at the research area Gies had in mind when he made his request, in 1924 The Rockefeller Institute was a leading center for microbiology research. This, coupled with the fact that caries, and periodontitis, are microbial in origin, suggests Gies envisioned Flexner starting a research program in the microbiology of caries and periodontal disease.

But Dr. Flexner’s response (Figure 1B) must have been a surprise. In his second paragraph Flexner writes “…. there is no possibility of the Rockefeller Institute entering the research field….”. Flexner goes on to write “Do you not think that the beginnings of dental research will have to be made at the dental collages, just as the beginnings of medical research had of course to be made at the medical colleges.” Just to be sure his message is clear he concludes with “I can hardly see how the object can be obtained in any other way.” As we are not privy to his 1924 draft, it is unclear to what degree Flexner’s reply influenced the report. But Gies in the final version of report recommends additional science courses be included in the dental curriculum and that dental schools encourage research programs for students and faculty. And in a footnote, he asks for “liberal financial support…to the dental schools”.1

Again, we can only guess at the effect Flexner’s reply had on Gies. But by 1926, Gies appears to have decided a research program focusing on the hereditary influences on odontogenesis and amelogenesis. For example, the contents of section E.c. titled “Various influences on the process of normal dentition,”1 Gies notes “a pivotal truth is the fact that the foundations for the permanent dentition are laid during embryonic development.”1 He then goes on to identify the importance of heredity and the need for additional research on development to correct the hereditary mistakes.1 In 1926, the role of DNA as the genetic material had not been established– that had to wait until 1944 when Avery McCarty and MacLeod published their study.2 Interestingly their research was carried out at the Rockefeller Institute.

It would take almost 100 years for a sufficient number of scientific advances to be made for it possible to consider developing his ideas into a curriculum.

In section E.b. called “Essential biological considerations,” Gies describes a research agenda that he hopes will lead to a “system of preventive control of oral abnormalities.”1 In the remainder of this section, and particularly continuing into section E.c., Gies continues to focus on the process of formation of a normal dentition. In more than one section, Gies calls attention to the “problems of normal production of the teeth and of prevention of birth defects,”1 and continues “for the prevention of dental and oral deficiencies would necessarily include thorough research …especially to formation, eruption, alignment, and occlusion; to the protective enamel; and to the tissues that hold the teeth in place.”1

Almost 100 years later, the genes responsible for odontogenesis and amelogenesis have been identified.3-5 In addition, the discovery of Crispr (clustered regularly interspaced short palindromic repeats) technology suggests editing of malfunctioning genes involved in the lingual-labial and oral-aboral positioning of the presumptive tooth might be possible.6

Given these discoveries, in 2021, it is now possible to envision a framework for developing a 21st century dental school curriculum that include many of the goals Gies envisioned in 1926.

But developing such a curriculum will only be the first step. Introducing such a curriculum into American dental schools, step two, cannot occur overnight. Integrating step two will require a gradual segue from the present curriculum, focused on microbes and the treatment of microbial-based dental diseases, to one based on repair of dental tissues using bio-regeneration and the prevention of aberrant amelogenesis and odontogenesis by genomic interventions. While genomic-based diagnostic and treatment technologies are not now on the market, if history is any guide, with time they will be. Considering at present time how the two ways, this new technology would be introduced into the curriculum would be appropriate. Either genomic technologies could be incorporated into existing specialties, such as orthodontics or periodontics, or a new specialty could be developed for these biobased technologies and interventions. In fact, the specialty called Biodontics was developed as a framework for this emerging dental specialty exactly for this purpose.7

The overall recommendations Gies made in 1926 for dental education remain valid, including his hopes that 1 day dentists would treat dental diseases by correcting the hereditary errors that were responsible for them.1 Given the scientific advances that have emerged in the first 20 years of the 21st century, and those yet to come in the next 20 years, it is not too soon for dental educators to begin developing a curriculum that incorporates tissue regeneration and gene editing technologies into the curriculum with the goal of creating a new dentist, a Biodontist, qualified to treat dental diseases by genetic control of amelogenesis and dentinogenesis.

I wish to thank Ms. Margaret A. Snyder, appraisal archivist, at the Rockefeller Archive Center for assisting in my search for the correspondence cited in this paper.

The authors declare that there is no conflict of interest that could be perceived as prejudicing the impartiality of the research reported.

Copyright © 2004 – 2023 | Center for Research & Education in Technology | All Rights Reserved
Copyright Notice:
The content within this website is protected by U.S. and International copyright.
Reproduction and/or distribution of any text, imagery, and its likeness without the expressed written permission and consent of CRETDental.org / The Center for Research & Education in Technology is strictly prohibited.